The M55 relay teams looked unbeatable on paper.  We took the attitude that we just needed to get it around the track without a lane violation or a dropped stick, and we would win easily.

4x100m
Tony and James had some minor injuries but were good to go.  We got to use the infield for exchange practice.  I was really glad to have this team together... especially Alan, the M55 100m World Champion on anchor.  I was second leg, running against the German who I narrowly beat in the 200m -  probably the fastest non-American on the track.  I carefully measured the steps that I thought I'd need to accelerate into the zone but when I saw Tony rippin' around the turn, I left early.   Our pass went well, as did all our passes.   It was actually a little closer than I expected with Alan getting the baton with a small lead.  He blew away the field by 10m, and that ... was that.   I was surprised that our 47.10 time was less than a second off the world record!   Not bad for a pickup relay team.   We even ran faster than the M50 4x100 USA Silver Medalists, which was no shabby team.  We averaged 11.77 a leg, not bad.  Unfortunately, my name wasn't listed in the official results as I was a sub on this team.  Doesn't matter, I have the medal.  Germany was Silver, and France - Bronze.  We beat teams from Great Britain, Spain, Australia, and India.

The medal ceremony was nice.  They chose some hot French women to kiss us and award the medals. 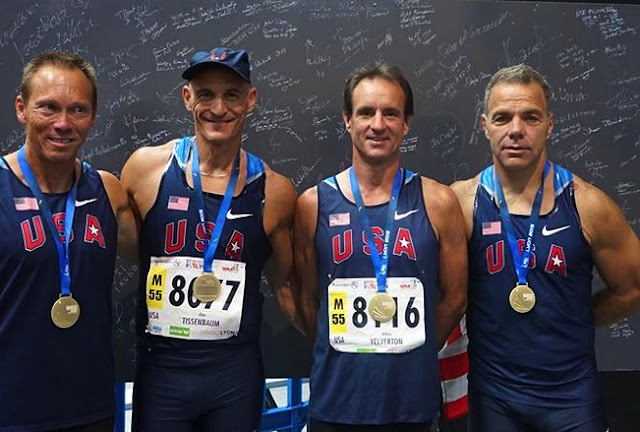 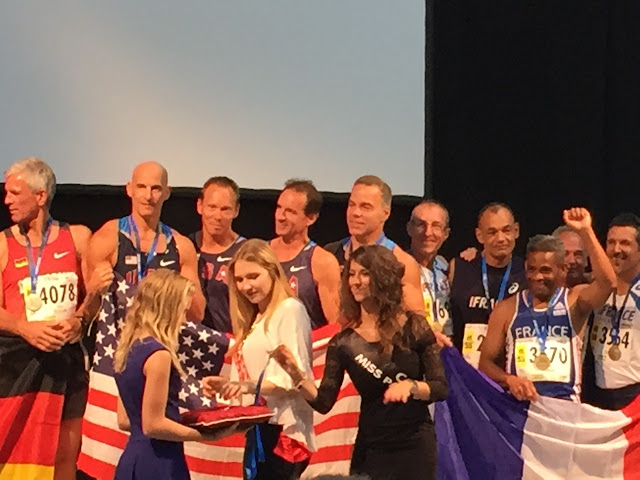 4x400m
This looked to be a blowout in the making and it was.  I had two concerns... first was Alan hadn't run a 400 in forever, and James on anchor had a ham issue and was going to run anchor against the 400m Gold medalist and the 4th place 400m guy from Germany.  So, he would need a lead.  We were all tired, especially me and James ... having run 3 rounds of the 200 and 400, and the 4x100.   Brent led off against Great Britain who narrowly beat him in the semis.  I was running second leg, we had lane 7.   Brent ran a respectable leg and I got the baton in a tie for the lead.  I ran relaxed and fast, never saw anyone after receiving the baton as I led at the break.  Looking at the video, I gave Alan a 30m+ lead with a leg of about 56.   Alan blew it wide open and by the time James got the baton, he had a 70m+ lead.  He didn't give any back to France and we won by a comfortable 70m.  We all ran 56-57.5 legs and finished in 3:48.53.  We beat teams from France, Germany, Great Britain, Spain, Australia, Chile, Russia, and India.  (We could have lapped India if they were in our heat).

James had to catch a train so Brent, Alan and I stayed for the medal ceremony for the 4x400 relays -which was also the closing ceremonies.  I was tired and sunburnt, but had fun.  Lots of photos and enthusiasm.  A lot of heart felt congrats and good byes.  Team photos and hugs, flags flying, emotional expressions ... some of the female athletes were crying.  It was cool.

I'll have a few closing thoughts in a later post but let me say, Viva la France!   You really did it well. 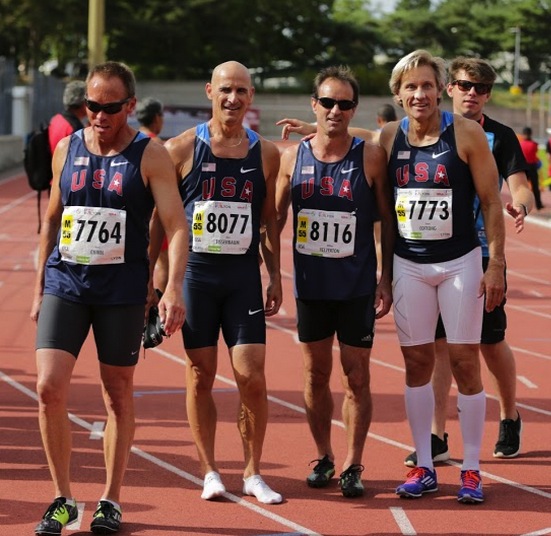 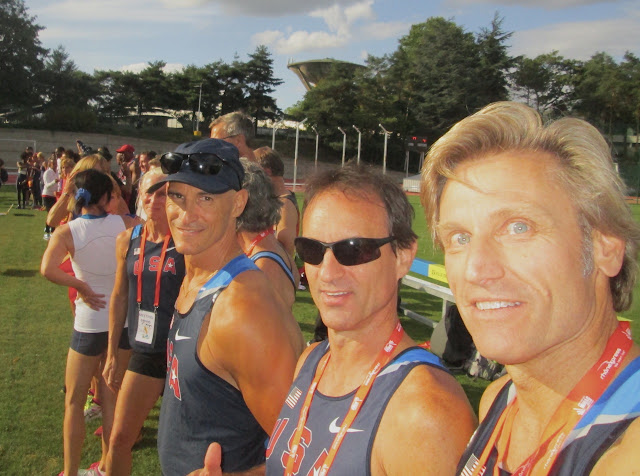