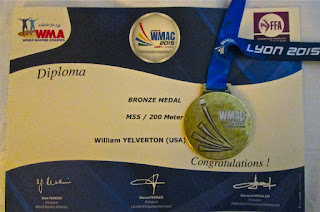 My first World Medal.  I didn't expect to medal in the 200m, but happy to collect.  My times didn't come close to the 200s I ran in Jacksonville on that warm wind-assisted SX Mondo track. That seemed the rule among other sprinters that were here, and at the Jacksonville Nationals.  The track at Balmont Stadium is the typical granular red track, a little mushy.   Plus, I am totally sleep deprived. My third night here and I have yet to be able to sleep a complete night.

We had semis in the morning at 10:10am and finals in the evening at 5:15pm.   The weather was great, actually even chilly in the morning. Cloudy, 60ºs.   I was really excited about the semis and sort of lost my head and forgot my race plan.  I went out burning on the turn and rigged in the end, losing a lot of time.  I still won my heat - the slowest of 3, but almost got nipped at the end by my countryman Don S., who I think ran a PR.   My time sucked, 25.24, but it got me third seed for the finals and a good lane - lane 3 with the competition on the outside of me (Bruno and Ric).  Went back to the hotel for a little food and sleep.

The finals.  There was excitement and tension in the air.  Not a lot of smiles in the warm up area.  It was serious business.  I have not run in a stadium this full since the Penn Relays.  The atmosphere was electric with an enthusiastic crowd, choreographed music playing in between introductions of athletes at the starting blocks in 2 languages.  It felt like the Olympics ... or something.

I was determined to run a smarter race and not let myself get out of hand.  Bruno from France had run a smokin' 24.5 in the semis and was the favorite - also having won bronze in the 100m.  He was just to my outside in lane 4.  The dude is fast... but you'd never expect that by his appearance.  Not a particularly athletic looking guy, white, balding with wire rimmed glasses, (sort of looked like the "Radar O'Reilly" character from MASH).  However, he holds the 100m M50 European Record at 11.37.  A respected serious veteran sprinter.  In lane 5 was Ric from England, ran the fastest time in the prelims.

I got a good start and relaxed into cruise mode.  I pulled within one step behind Bruno and Ric a the top of the straight.  Bruno just ran away from Ric and I.   I fought down the stretch with Ric and he got me by a step.  I felt the S. African, Thomas close to me and knew it would be close for the bronze.  I leaned real hard and got it!   James C. was a close 5th and Gerhard Z. 6th.   Bruno crossed the line celebrating with his finger in the air, comfortably ahead.  It was very close for the bronze... 3rd-6th place was separated by just 0.18 sec.

My dad was pleased.  We decided to go back to the hotel and change for the medal ceremony, which was very professional, with all the pomp and circumstance... I stood for the French National Anthem, which the locals belted out raucously.   It was held on a stage in the indoor track arena next to the stadium.  Back stage in the 'medalists only' area, I got to chat with Ric and the W50 200m medalist who all spoke English (an Aussie, New Zealander, and a Dutch).   It was a memorable occasion.

I feel fortunate to have a medal.   Besides Lee who won bronze in M45, many of the big guns of the USA Masters missed getting any hardware.  There were 3 USA men that won medals in the 200m dash, none of 'em gold -  Antwon, Lee and I.

The fence surrounding this track is weird, almost something you'd see at a NASCAR track.  Doesn't make for very good photos.   Ken Stone remarked on his blog, "The track fans of Lyon must be very dangerous to need a fence like this."